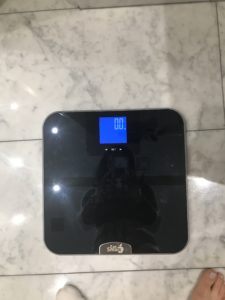 My husband, William, recently bought us a new scale. He’s on a truly hateful health kick. It started about a year ago when he read The Longevity Diet by Valter Longo and decided he was going to Benjamin Button himself. Fast forward, he’s down 34 pounds and has done three five-day calorie-restricted fasts.

Back to the scale and why I hate it/William. This fancy scale pictured here shows not only your body weight but also your body fat percentage, muscle mass and amount of body water. You have to enter personal data in when you first set it up, including age and height, so that it can calculate the other details. We did it. He’s Person 1 and I’m Person 2.

Today I got on, already knowing things would be bad. A pint of Talenti ice cream, half a chocolate chip cake, and 30 chocolate covered almonds felt like a great idea while they were going down, but you all know where this is headed. I get on the scale and only see my weight, none of the other info. Why is that? BECAUSE IT DIDN’T KNOW IF I WAS PERSON ONE OR PERSON TWO. Once you get less than eight pounds apart, the scale can’t distinguish who is who. My husband, who is five inches taller than me, now weighs only seven pounds more.

I’m not saying I was ever the “dainty” one tucked under her burly man’s arm. We were two slightly chubby people in love. Now I’m normal/thin and he’s full on manorexic. I’m thinking of fattening him up Regina George style because this current state of affairs is UNACCEPTABLE.